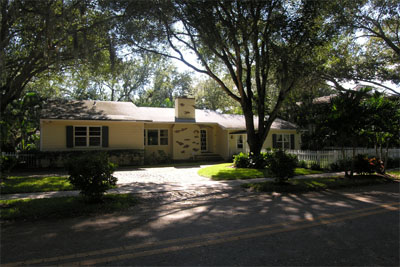 When Henry Flagler brought his Florida East Coast Railway to Fort Lauderdale in the late 1890s, he wanted to continue on a straight line along the coastal ridge to Miami. But that would have taken his tracks through a beautiful oak hammock, and Mary Brickell, who owned the land, refused to sell. She made Flagler take his tracks west. One day this would be a beautiful residential neighborhood, she predicted. Mary Brickell was right. Today the neighborhood she preserved is Colee Hammock, one of Florida’s most beautiful urban subdivisions, still graced with ancient oaks, a small town atmosphere within a major metropolitan area.

Some of the most charming residences, such as the 1920s Shepard Estate on Las Olas Boulevard, go back decades. But recent years have seen older cottages replaced by large, elegant homes, some of Fort Lauderdale’s finest residences. A rarity in Florida, or anywhere, it remains a neighborhood that is peaceful and much of it pristinely tropical, yet within walking distance of Fort Lauderdale’s beach, and even closer to the shopping and entertainment of Las Olas Boulevard, which actually bisects the neighborhood. That makes it convenient to the redeveloped downtown business district. All that, and just 10 minutes from a major airport. The proximity of churches and good schools helps attract retirees and young families.

The charm of Colee Hammock is widely appreciated by the entire Fort Lauderdale community, and that sometimes creates problems The Homeowners Association has been fortunate to have enjoyed outstanding leadership. Past officers have included some of the city’s outstanding citizens, supported by residents, both mindful of the precedent set by Mary Brickell when she rerouted a railroad more than 100 years ago.

You and your team kept your promise-“Results Not Excuses” and you did it in a very professional way, in only 4 months! We would like to thank you and your team of experts for a job well done.