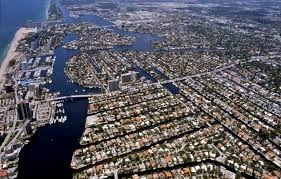 Las Olas Boulevard is a popular thoroughfare in Ft. Lauderdale that runs from Andrews Avenue to A1A and Ft. Lauderdale beach. The Las Olas Isles are in the easternmost section of Las Olas Blvd. and is interlaced with canals and waterfront homes. Las Olas Blvd. was constructed in 1917 when Las Olas was just a dirt road that crossed the swampy wetlands to the barrier island at Ft. Lauderdale beach. The Las Olas Isles were dredged in the 1920’s to create land for the area’s most picturesque waterfront residential district. This miracle of engineering began in the 1920s when developer Charles G. Rodes studied the parallel canal system of Venice, Italy, and used a technique call “finger islanding” to create the most sought-after pieces of real estate in the country. Today these waterfront homes are available starting $1,000,000 and above. These waterfront homes are desirable for boaters due to deep water and ocean access without fixed bridges. The close proximity to the beach, Las Olas shops and restaurants, downtown, Port Everglades and airport is another driving force to the popularity of this area. Las Olas Isles include; Coral Isles, Idlewyld, Riviera Isles, Stilwell Isles, Navarro Isle, Nurmi Isles, Hendricks Isle, Isle of Venice, Isle of Capri, Coconut Isle and Las Olas Seven Isles.

Are you looking for a realtor that is attuned to your needs; that knows the market; that has a keen appreciation for value; that understands a competitive edge; that has a sense of market timing and a... singular focus on bringing home the bacon? Look no further than Jackie Scott. I have known and worked with Jackie Scott for several years. I recommend her to you. But she doesn't need my recommendation; her professional track record speaks for itself.