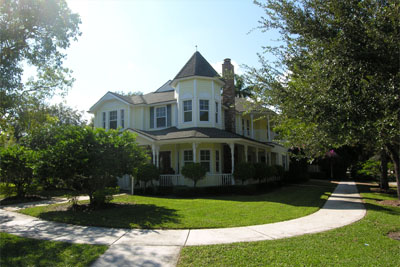 One of the largest neighborhoods in the city is defined geographically by Sunrise Blvd. to the North, US 1 to the West, Broward Blvd. to the South and NE 20th Avenue to the East.  There are approximately 2,000 homes and 1,500 condo apartments and townhomes.  There are a large number of older bungalow homes mixed in with ranch style homes built between 1940-1950.  Newly constructed homes are typically 2 story and approximately 3,000 sq ft.

Victoria Park Road is well known throughout the city and is recognized as one of the most beautiful Arbor streets in Ft. Lauderdale.  Whether driving, walking, jogging or bicycling along Victoria Park Road you will see some of the most beautiful trees in the city that are said to be over 100 years old.  When the trees are in bloom it becomes a colorful bouquet of Purple Jacaranda, Orange Poinciana, Yellow Tababuias and the hearty green leaves from the twisted limbs of the Gumbo Limbos planted in between the stately oak trees.

The neighborhood has over 95 acres of parks for all types of recreation and relaxation.  The most famous is Holiday Park where Chris Evert grew up playing tennis on the city tennis courts.  Today it is known as a world class tennis facility open to the public.  Holiday Park is filled with baseball fields, soccer fields, football field, indoor and outdoor basketball courts, racquetball, squash and jogging paths.  Annie Beck Park is a beautiful walking park along the canal where some people fish and just relax.  Victoria Park has the gazebo and an area to launch your canoe or kayak for a relaxing ride through the waterways.

The Homeowners Association is strictly volunteer and very active.  Events are scheduled year round for the children and fund raising events to provide money for capital improvements in the neighborhood.